How to write efficient conversions

Converting data between different representations is a common task in computer engineering. Dart is no exception and comes with dart:convert, a core library that provides a set of converters and useful tools to build new converters. Examples of converters provided by the library include those for commonly used encodings such as JSON and UTF-8. In this document, we show how Dart’s converters work and how you can create your own efficient converters that fit into the Dart world.

Dart’s conversion architecture is based on converters, which translate from one representation to another. When conversions are reversible, two converters are grouped together into a codec (coder-decoder). The term codec is frequently used for audio and video processing but also applies to string encodings such as UTF-8 or JSON.

By convention, all converters in Dart use the abstractions provided in the dart:convert library. This provides a consistent API for developers and ensures that converters can work together. For instance, converters (or codecs) can be fused together if their type matches, and the resulting converter can then be used as a single unit. Furthermore, these fused converters frequently work more efficiently than if they had been used separately.

A codec is a combination of two converters where one encodes and the other one decodes:

As can be seen, codecs provide convenience methods such as encode() and decode() that are expressed in terms of the encoder and decoder. The fuse() method and inverted getter allow you to fuse converters and change the direction of a codec, respectively. The base implementation of Codec for these two members provides a solid default implementation and implementers usually don’t need to worry about them.

The codec can be instantiated with arguments that are used as default values, unless they are overridden by the named arguments during the encode()/decode() call.

As a general rule: if a codec can be configured, it should add named arguments to the encode()/decode() methods and allow their defaults to be set in constructors. When possible, codec constructors should be const constructors.

Converters, and in particular their convert() methods, are where the real conversions happen:

Such a minimal converter works in synchronous settings, but does not work when used with chunks (either synchronously or asynchronously). In particular, such a simple converter doesn’t work as a transformer (one of the nicer features of Converters). A fully implemented converter implements the StreamTransformer interface and can thus be given to the Stream.transform() method.

Probably the most common use case is the decoding of UTF-8 with utf8.decoder:

The concept of chunked conversions can be confusing, but at its core, it is relatively simple. When a chunked conversion (including a stream transformation) is started, the converter’s startChunkedConversion method is invoked with an output- sink as argument. The method then returns an input sink into which the caller puts data. 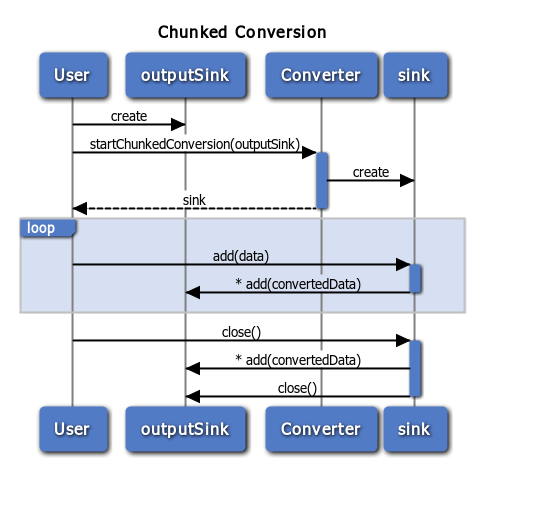 Note: An asterisk (*) in the diagram represents optional multiple calls.

In the diagram, the first step consists of creating an outputSink that should be filled with the converted data. Then, the user invokes the startChunkedConversion() method of the converter with the output sink. The result is an input sink with methods add() and close().

The complexity of the input sink (in combination with the converter) varies. Some chunked conversions are trivially mapped to the non-chunked versions (like a String→String converter that removes the character a), while others are more complicated. A safe, although inefficient (and usually unrecommended) way to implement the chunked conversion is to buffer and concatenate all the incoming data and to do the conversion in one go. This is, how the JSON decoder is currently (January 2014) implemented.

In general, the type of the chunked conversion is determined by the most useful case when used as a StreamTransformer.

ChunkedConversionSinks are used to add new data to a converter or as output from converters. The basic ChunkedConversionSink comes with two methods: add() and close(). These have the same functionality as in all other sinks of the system such as StringSinks or StreamSinks.

The ChunkedConversionSinks semantics are similar to that of IOSinks: data added to the sink must not be modified unless it can be guaranteed that the data has been handled. For Strings this is not a problem (since they are immutable), but for lists of bytes it frequently means allocating a fresh copy of the list. This can be inefficient and the dart:convert library thus comes with subclasses of ChunkedConversionSink that support more efficient ways of passing data.

For instance, the ByteConversionSink, has the additional method

Semantically, it accepts a list (which may not be held onto), the sub-range that the converter operates on, and a boolean isLast, which can be set instead of calling close().

As a user of the chunked conversion sink (which is used both as input and output of converters), this simply provides more choice. The fact that the list is not held onto, means that you can use a cache and reuse that one for every call. Combining add() with close() may help the receiver in that it can avoid buffering data. Accepting sub-lists avoids expensive calls to subList() (to copy the data).

The drawback of this interface is that it is more complicated to implement. To ease the pain for developers, every improved chunked conversion sink of dart:convert also comes with a base class that implements all methods except one (which is abstract). The implementor of the conversion sink can then decide whether to take advantage of the additional methods.

Note: Chunked conversion sinks *must* extend the corresponding base class. This assures that adding functionality to the existing sink interfaces does not break the extended sinks.

This section shows all the steps needed to create a simple encryption converter and how a custom ChunkedConversionSink can improve performance.

Let’s start with the simple synchronous converter, whose encryption routine simply rotates bytes by the given key:

We can (and should) avoid some of the new allocations, but for simplicity we allocate a new instance of RotConverter every time one is needed.

This is how we use the Rot codec:

We are on the right track. The codec works, but it is still missing the chunked encoding part. Because each byte is encoded separately we can fall back to the synchronous conversion method:

Now, we can use the converter with chunked conversions or even for stream transformations:

For many purposes, the current version of Rot is sufficient. That is, the benefit of improvements would be outweighed by the cost of more complex code and test requirements. Let’s assume, however, that the performance of the converter is critical (it’s on the hot path and up on the profile). We furthermore assume that the cost of allocating a new list for every chunk is killing performance (a reasonable assumption).

We start by making the allocation cost cheaper: by using a typed byte-list we can reduce the size of the allocated list by a factor of 8 (on 64-bit machines). This one line change doesn’t remove the allocation, but makes it much cheaper.

We can also avoid the allocation altogether if we overwrite the input. In the following version of RotSink, we add a new method addModifiable() that does exactly that:

For simplicity we propose a new method that consumes a complete list. A more advanced method (for example addModifiableSlice()) would take range arguments (from, to) and an isLast boolean as arguments.

This new method is not yet used by transformers, but we can already use it when invoking startChunkedConversion() explicitly.

In this small example, performance isn’t visibly different, but internally the chunked conversion avoids allocating new lists for the individual chunks. For two small chunks, it doesn’t make a difference, but if we implement this for the stream transformer, encrypting a bigger file can be noticeably faster.

To do this, we can make use of the undocumented feature that IOStreams provide modifiable lists. We could now simply rewrite add() and point it directly to addModifiable(). In general, this is not safe, and such a converter would be the potential source of hard-to-track bugs. Instead, we write a converter that does the unmodifiable-to-modifiable conversion explicitly, and then fuse the two converters.

ToModifiableSink just signals the next sink that the incoming chunk is modifiable. We can use this to make our pipeline more efficient:

On my machine, this small modification brought the encryption time of an 11MB file from 450ms down to 260ms. We achieved this speed up without losing compatibility with existing codecs (with regard to the fuse() method) and the converter still functions as a stream transformer.

Reusing the input works nicely with other converters and not just with our Rot cipher. We should therefore make an interface that generalizes the concept. For simplicity, we named it CipherSink, although it has, of course, uses outside the encryption world.

We can then make our RotSink private and expose the CipherSink instead. Other developers can now reuse our work (CipherSink and ToModifiableConverter) and benefit from it.

But we are not done yet.

Although we won’t make the cipher faster anymore, we can improve the output side of our Rot converter. Take, for instance, the fusion of two encryptions:

Since the first RotConverter invokes outSink.add(), the second RotConverter assumes that input cannot be modified and allocates a copy. We can work around this by sandwiching a ToModifiableConverter in between the two ciphers:

This works, but is hackish. We want the RotConverters to work without intermediate converters. The first cipher should look at the outSink and determines if it is a CipherSink or not. We can do this either, whenever we want to add a new chunk, or at the beginning when we start a chunked conversion. We prefer the latter approach:

We now only need to change the _RotSink to take advantage of the fact that it always receives a CipherSink as an argument to its constructor:

With these changes our super secure, double cipher won’t allocate any new lists and our work is done.

Thanks to Lasse Reichstein Holst Nielsen, Anders Johnsen, and Matias Meno who were a great help in writing this article.