This page hasn’t yet been updated to reflect sound null safety, which was introduced in Dart 2.12.

This tutorial shows you how to delete elements from the DOM. A new and improved version of the todo app from the previous tutorial now allows the user to delete items from the list either one at a time, or all at once.

Below is a revised version of the todo app from the previous tutorial that allows you to delete items. Stop procrastinating and remove items from your to do list.

Note: If you see an empty box instead of code, go to the DartPad troubleshooting page.

The remaining sections describe key aspects of the code added to the todo app for this tutorial. Specifically, they look at the Dart code that removes one or more elements from the DOM and the CSS code that makes the text red and larger.

Changing the appearance when cursor is over an element

As you saw, an item in the list turns red and gets bigger when the user points at it. The mouse cursor also changes shape. These visual clues are an important part of the user interface in this example because they are the only indication to the user that something will happen when the item is clicked.

This behavior is coded in the todo_with_delete app’s CSS file with this rule:

We’ve used this CSS trick instead of providing a familiar user interface, such as a button with an ‘X’ on it, to keep the code simpler.

Removing an element from the DOM tree 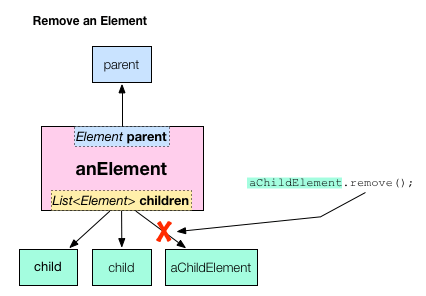 In the todo_with_delete app, the user clicks an item to delete it. This is achieved with one line of Dart code. When a new to do item is created, the code registers a mouse click handler on the new element. When the user clicks that new element, its event handler causes the element to remove itself from the DOM with remove().

When the element removes itself from the DOM, the browser re-renders the page, and the item disappears from the to do list.

Removing all child elements from an element

When the user clicks the Delete All button, all elements are removed from the list. 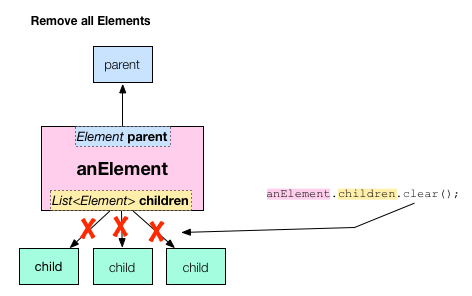 In this case, using the List class’s clear() function yields the most concise code. Here’s the code from the todo_with_delete app that implements the Delete All button.

About function expressions and =>

The todo_with_delete app uses some interesting Dart syntax when adding an event listener to the Delete All button. The argument passed into the listen() function is an example of a function expression, which is a shorthand way of defining functions and it uses the => syntax to define the function concisely.

It is equivalent to writing this: