Add elements to the DOM

Note: This page uses embedded DartPads to display runnable examples. If you see empty boxes instead of DartPads, go to the DartPad troubleshooting page.

HTML page elements are one kind of node that can be in the DOM tree. They have a rectangular area on the page and can receive events. Examples of elements include heading elements, paragraph elements, table elements, button elements, and so on.

In Dart, elements are implemented by the Element class, which is a subclass of Node. Because the nodes you care about most are usually elements, this tutorial focuses on Element, rather than on Node.

In this tutorial, you will be working with a sample web app that is a partial implementation of a todo list. This program dynamically changes the DOM, and therefore the web page, by adding elements to the DOM tree.

Try it! Click Run to start the web app. Then type in the app’s text field, and press return. The app adds an item to the list. Enter a few items into the input field.

This is the beginning of an app to manage a list of things to do. Right now, this app is for procrastinators only because the program can only add items to your to do list but not remove them.

About parent and child Elements in Dart

The Node class implements the basic treeing behavior for nodes in the Dart DOM. The Element class is a subclass of Node that implements the behavior specific to page element nodes. For example, an element knows the width and height of its enclosing rectangle on the page and it can receive events.

You can manipulate the DOM tree by adding and deleting nodes. However, many Dart apps are concerned only with page elements. So for convenience and code simplicity, the Element class implements API for interacting with a subset of the DOM that includes only the nodes that are elements. You can work with a virtual tree of elements rather than the more complex tree of Node objects. This tutorial shows you how to manipulate the DOM through the Element class.

An Element object has a parent Element and maintains references to its children elements in a list. 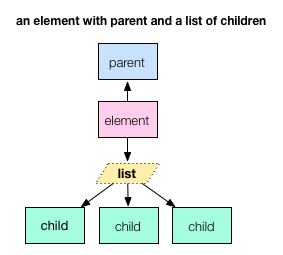 An Element object maintains references to its child elements in a list. Listis a class in the dart:core library that implements an indexable collection with a length. A list can be of fixed size or extendable.

List is an example of a generic (or parameterized) type—a type that can declare formal type parameters. This means that a list can be declared to contain only objects of a particular type. For example:

An Element maintains references to its child element in a List<Element>, which your Dart code can refer to with the getter children. The List class has various methods and operators whereby you can refer to each child element individually, iterate over the list, and add and remove elements. 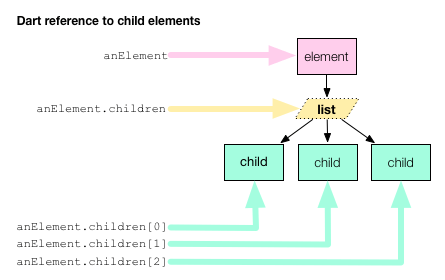 You can change the tree structure by adding children to and removing children from an element’s list of children. 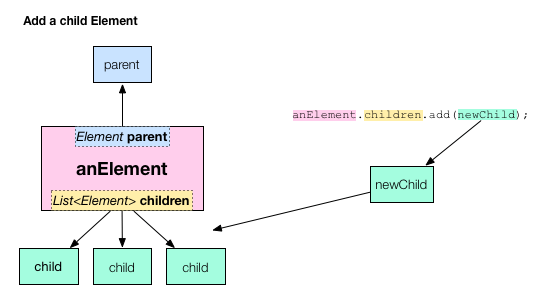 When you change an Element or its child elements in your Dart program, you change the DOM and therefore the web page. The browser re-renders the page automatically.

Setting up the page in HTML

Let’s take a look at the todo app to see how it dynamically adds an element to the DOM and displays a new item in the list of things to do.

The HTML code for the todo app sets up the initial HTML page, and thereby the initial DOM tree. You could get the same results using Dart code, but it’s usually better to define the primary page elements in HTML code (easier to read, quicker to load).

The following diagram shows a partial DOM tree for the todo app.

Of interest are the two-page elements that have IDs: to-do-input and to-do-list. The first identifies the <input> element into which the user types. The second identifies the <ul> (unordered list) element containing the task items. Dart code adds elements to this list whenever the user enters text into the input element.

Getting an element from the DOM

The following diagram shows the Dart code for the todo app.

The top-level variables are initialized using the dart:html library’s top-level querySelector() function to get the interesting elements from the DOM. Because calling querySelector() isn’t free, if a program refers to an element more than once it should stash a reference to the element if possible.

Note the types of these variables: InputElement and UListElement. These are both subclasses of Element. The dart:html library has dozens of Element subclasses, many of which correspond to certain HTML tags. This program uses three: 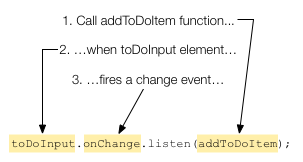 Rather than dissect this busy line of code, think of it as a Dart idiom for adding an event handler to an Element object.

A change event is just one of many types of events that an input element can generate. For example, you can use click to handle mouse clicks, or keyDown for when the user presses a key on the keyboard.

The argument passed to the listen() method is a callback function of type EventListener. EventListener is a typedef defined in the dart:html library as follows:

The addToDoItem() function ignores the Event object passed to it.

Adding an element to the DOM tree

The change event handler has the following code:

The final line of code is where the DOM gets changed.

An Element object keeps references to all of its children in a list called children. By adding and removing elements to and from this list, the code changes the DOM. When the DOM changes, the browser re-renders the browser page. The effect, in our todo app, is that a new bullet item appears in the to do list.

Let’s take a look at the CSS file for this app. 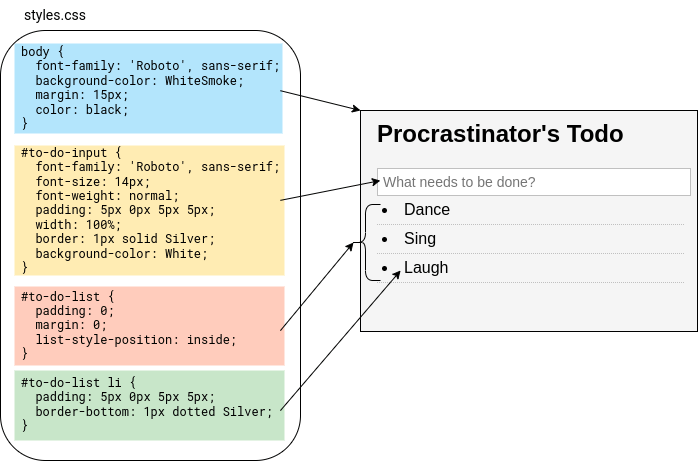 This code uses three different kinds of CSS selectors. The first is an HTML element selector that matches the <body> element and sets some basic style attributes, such as the background color, for the entire page. Next in the file are two ID selectors: #to-do-input controls the appearance of the input field and #to-do-list sets the appearance of the unordered list element in general. The elements in the list are controlled by the final rule, which uses both an ID selector and an HTML selector. This rule matches all <li> elements in the element with the ID to-do-list, thus styling each item in the to do list.

Moving elements within the DOM tree

The Anagram app shows how to move an element within the DOM.

Try it! Click Run to start the web app. Then form a word by clicking the app’s letter tiles.

When the program starts, it creates one button element for each of seven randomly selected letters. The program adds each button to a DOM element—a simple <div> element identified by the CSS selector letterpile—with a call to letterpile.children.add(). 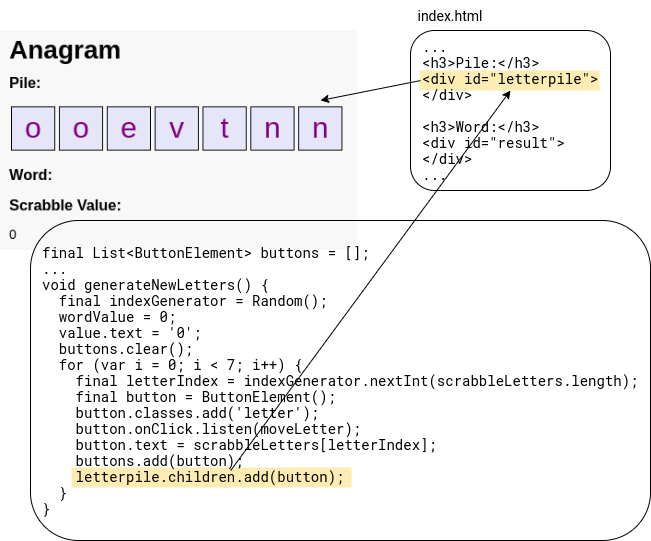 The += operator is a compound assignment operator, which combines an operation (+) with an assignment.

The scrabbleValues variable is a Map—a data structure that contains key/value pairs. Use the square bracket syntax to retrieve a value by its key and the length property to get the number of pairs it contains.

The next tutorial, Remove DOM Elements, describes how to remove elements from the DOM and items off your todo list.